O3 Chemicals, known for their Green Drive, has developed a system that allows contractors in the sector the platform and tools to take control of their entire maintenance operations – with the added benefit of digital tracking and records. This system is a first for the South African market.

The concept of this solution was derived out of the need to manage mould, that particularly favours the conditions in ACs, air handling units, condenser sets (and generally many other HVAC elements). The effect mould can have on various aspects of a building overall, and its management, was gaining a lot of traction until the onset of the Covid-19 pandemic that has seen the spotlight over the last two years.

According to Mike Blow, chief executive officer of O3 Chemicals (O3), “Mould is something that can be found anywhere in a building and can affect the air quality through spores being present. Unlike pathogens such as the Covid virus that can be ‘killed’ or neutralised, you cannot ‘kill’ mould but rather one has to treat surfaces on which mould can grow, essentially eliminating it from settling and colonising.

“We began addressing mould in 2019 through various research and looking at what was happening out in the market. This was followed by a process of then developing the chemicals that can treat and eliminate the conditions within an HVAC system where mould usually can be found – the dirt and grime that collects in many components as well as any moisture or water that is stagnant in the system. Cleaning and regular maintenance of HVAC components is not only about mould – it has a significant impact on system performance too.”

By applying chemical cleaning and removing the ‘dirt and grime’, you remove the mould and allow a system to perform optimally. Interesting to note is that if mould is not adequately treated, it will grow again and within a very short time frame – 48 hours.

Mould being left in a building or system unattended can reach a point where, along with other contributing factors, can cause what is known as ‘sick building syndrome’ as a result – and this can be very dangerous for occupants, leading to a variety of health-related problems which have been shown to affect productivity. Mould is of particular concern due to its toxicity and the ability of spores to move around as an airborne risk.

Taking things a step further, O3, now having developed the chemicals, took a look at how maintenance and cleaning was carried out generally in the industry, and found the process to be very old-fashioned, time consuming and wasteful of resources.

“Contractors generally can take hours to clean coils or units depending on their size and more importantly deploying the existing method uses an immense amount of water – sometimes thousands of litres which is such a waste, as well as a lot of chemicals that are expensive. Understanding the need allowed us to develop a whole ‘going green’ process that includes our developed chemicals, special compressors that are sourced from a local supplier in Durban and a digital element linked to convenient QR tags that further speeds up a lot of admin tasks.

This combination, taking an example of a large air handling unit, allows contractors to halve the time out on site, use as little as 40-50 litres of water and only two litres of chemicals,” adds Blow. 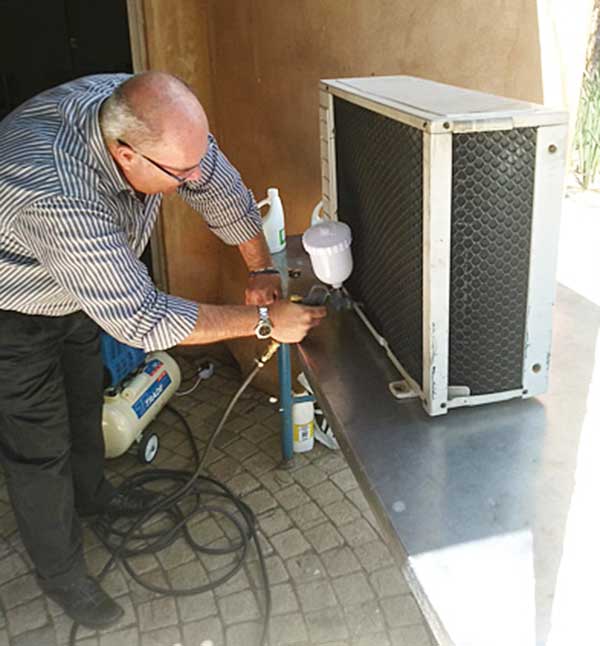 Demonstrating the product at an official promotional day in October 2021.

Various before and after airflow measurements and photos are taken that enables time and date stamps, and visuals that team leaders and facility managers have access to, to see what is happening as the technician is working. This had not been possible before the introduction of smartphones. While technicians are on site, the ability to gain immediate data and videos about how to apply the particular chemicals is available through product QR tags that ensure the most cost effective and efficient service is delivered.

Taking technology a step further, through a program that O3 has developed over the last four years, everything involved in any maintenance carried out on any unit is all linked through a unit QR tag that can either be issued at an OEM level or the contractor (issued by O3 Chemicals directly).

“From the moment the QR tag of any unit is registered on our program, everything that happens on that unit can be recorded and is captured in such a way that we are able to, for example, generate graphs that will show how the coils were cleaned and what the airflow readings were before and afterwards.

Facility managers or contractors with SLAs can check in on the maintenance status of any of the assets around the country. The program can also pinpoint an asset in a building, or when scanning the unit QR tag, give details about the owner and the unit history.

This is another major breakthrough for us because nobody has provided this type of solution before,” Blow continues. 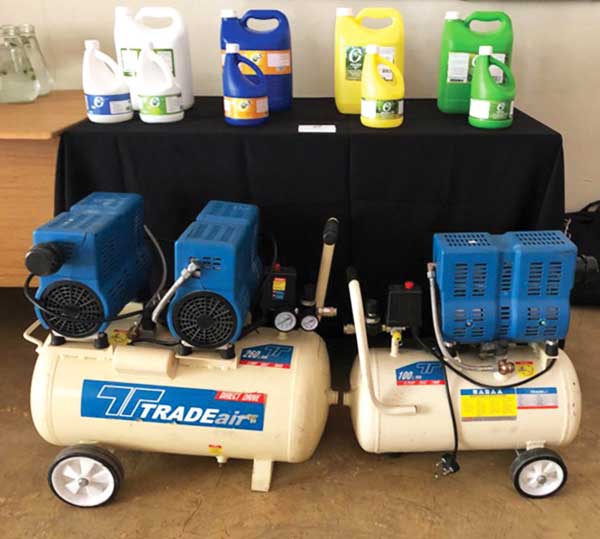 The solution, that includes the required chemicals, silent compressors and digital aspects, is far more efficient that the old-fashioned methods known to be wasteful.

Other advantages of this new system are that is has been accredited as 100% safe to use in a variety of applications including offices and commercial spaces, medical and therapy suites, and even food processing and preparation facilities. The inclusion of a silent compressor in the solution allows contractors to be able to offer service during regular business hours without any disruptions to the client – which was historically a challenge too.

The availability of the data collected lets any business or corporate forecast the maintenance needs on their HVAC equipment 12 months in advance and illustrate actual cost savings through the efficiency maintenance provides. This can amount to hundreds of thousands of rands a year. Also, warranty expiry can be tracked, and reminders of maintenance schedules can be set for both facility managers and contractors with a list of what chemicals will be required and what quantities should be used.

“The use of the data collected and ability to trace every unit that is part of this program now exists for the lifespan of the asset and creates the possibility of extending various services to clients. Advantages to both the contractor and facility manager (or owner) make this a complete and unique solution for the industry, and ‘green’ through significant savings on time and materials,” Blow concludes.